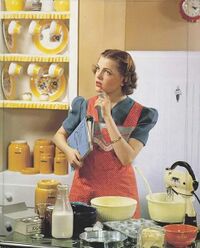 Hillary pondering her next ingredient

NEW YORK, New York -- Hillary Clinton has today announced that she no longer intends to run as a candidate for the Democratic Party nomination. She has cited personal reasons for the move, saying she has "too many important things to do around the house". These apparently include ironing, washing, and baking cookies.

Women's rights campaigners across America have welcomed the move, saying they are glad she has finally realised the important role a woman has to play in the home. Unconfirmed reports suggest that the decision may not have been all her own, as her husband had grown increasingly tired of seeing stacks of un-ironed clothes and dirty dishes lying around the Clinton homestead.

Mrs Clinton greeted waiting reporters with milk and cakes, apparently home made, as she prepared to answer questions on the steps of her home in New York this morning, but was forced to return to the house before addressing the waiting crowd as she had apparently left something on the stove.

John Edwards has thrown his hat back into the ring for the Democratic Party nomination this morning, after Barack Obama also quit the race yesterday to sell crack in downtown L.A.