UnNews:Clinton Gets Menopausal on Campaign Trail 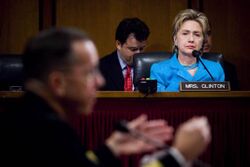 Cinton at the onset of menopause in 2007.

Washington-At a debate in Cleveland on Tuesday, Senator Hillary Clinton shocked the crowd with a violent outburst, one of many menopausal non-sequiturs that has recently befallen the presidential hopeful.

Clinton opened with a nostalgic statement: “I was born and raised in the...fuck, it’s hot in here,” she exclaimed, surprised by her own flare-up. And while trudging forward with the speech—sans additional vulgarity—she began to feverishly scratch at her arm, sending a wary sign to the audience.

Then again, on Wednesday, during an interview with 19 Action News, the Senator became confused and laid down on the couch. “I’m just feeling a bit dizzy,” she said, cutting her interviewer off, mid-sentence. The talk show host waited patiently for the politician to regain stamina, but within seconds, snores were heard throughout the studio.

Most female supporters of Clinton, who average in the 60-year-old age bracket, are sympathetic to their fellow’s biological makeup, and some even enclose tips on relieving menopausal symptoms with their monetary contributions.

But there are others who see Clinton’s conduct as an ominous sign of her deteriorating mental and hormonal capacities.

“I can’t believe that is what I have to look forward to in old age,” a fertile female rally attendee said. “There’s no hope in her ramblings.”

Despite this ‘physical rubicon,’ Senator Hillary Clinton vows to push forward on the campaign trail, and plans to incorporate more soy products and other vitamin-rich foods into her diet to alleviate body fluctuations.

“Although my body is changing, my political stance will not,” Clinton stated at a recent press conference on the matter. “And that’s why we need a Universal Health—oh God, I need some water.”