UnNews:Climbing Mt. Hood in December not a good idea, probably 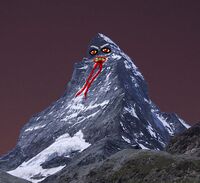 HOOD RIVER, Oregon -- The Oregon Department of Understatement and Hubris, or "O-DUH", responsible for explaining things to the arrogant, has issued a advisory that climbing Mount Hood in December probably is not a very good idea.

"New evidence suggests there could be some danger associated with an ascent this time of year'" said O-DUH spokesperson Ryan Widget.

According to Widget, "We've had some idea that climbing in early summer could be trouble - heck we had the wind blow a helicopter into the side of the mountain and roll - but until this year, we weren't too sure about December."

An O-DUH go-team was scrambled soon after Kelly James of Dallas used his cell phone on Dec. 10 to tell his family that he and two companions were in "trouble". Searchers found James's body in a snow cave Sunday, frozen like a popsicle, several days after he had died of hypothermia and extreme stupidity, according to the results of an autopsy Wednesday.

Video found in the snow cave indicate the three experienced climbers had planned on a quick, lightly equipped ascent on Mount Hood. They were equipped only with shorts, flip-flops, trail mix and prophylactics.

"At a minimum, it would be advisable to wear a shirt just for the outside chance it gets a little cold", Widget said. "You also may want to have some more food in case something happens and you have to live in a snow cave for a week. These guys obviously never watched Survivorman."

O-DUH was also involved in the recent search for a family that ended up taking a wrong turn in a blizzard. According to the O-DUH final report, "If you get a little disoriented in a snow storm and end up on an unpaved logging road not currently being used so the chance of anyone finding you before your car is buried in snow and you run out of food and attempt to walk for help is pretty small, it's probably best to stop and turn around."

Elaborating on the report, Widget remarked, "I don't want to jump to conclusions, but it appears that if you keep driving up a mountain during a snowstorm, the snow will be deeper then if you stayed below."

Hikers warned not to fuck with Mount Hood