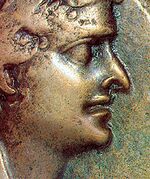 Maybe if I was drunk...Maybe.

~ BBC official on the BBC

Newcastle University's Shefton Museum-- Recent studies by academics (that means it's true) has shown that Cleopatra, the beautiful Egyptian Queen famously portrayed by Elizabeth Taylor, was actually an "ugly bitch" according to modern historic study.

William Shakespeare who was famous for saying "I'd hit that!" in regards to Cleopatra took some time to retract that statement:

When we asked Elizabeth Taylor about the new discovery she had this to say:

Elizabeth Taylor threatened military action against anybody who questions the beauty of Cleopatra noting her status as "Dame Commander of the British Empire" as evidence of her military connections; not realizing that the role is purely ceremonial. Oh well, that's our Lizzie!

Roman writers, when pressed on the issue, claimed Cleopatra was a lovely charming woman with a great voice and friendly personality, but when asked about her looks they murmured amongst themselves before saying "she's not my type."