UnNews:Classic children's books to be modernized 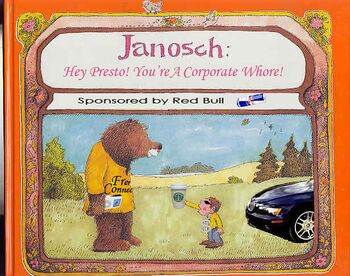 Soon our kids will be swillin' Red Bull in the morning instead of orange juice.

A major publisher has announced plans to re-release a series of classic children’s books rewritten for today’s society. The publisher, Third Grade Level Publications, intends to release at least fifteen of the rewritten classics by the end of the year.

Marie Landover, public relations agent for TGLP, told us that the revised canon of classic children’s literature is “very exciting...fresh while staying true to the spirit of the originals but with less moralizing and more solid advice for children growing up in today’s world.”

The first of the titles to be released under the company’s label will be a new rendition of a classic Dr. Seuss book. Hop on Pop, Get Sued, according to the description given by the publisher, is a carefree jaunt through the world of lawsuits. The book’s tagline is “Go ahead and have fun, but remember – hop on Pop too much and he may sue the pants off ya!”

Many consumers are enthused by the announcement. “I think it’s a great chance for today’s children to discover the classics their parents had growing up,” said one respondent in an opinion poll, “and to learn about the dangers of risky behavior such as playful roughhousing with a parent, eating any kind of food at a restaurant, and sitting quietly in the house. Carbon monoxide buildup, you understand,” she added.

Some of the new titles will concentrate on the modern outlook of life, affected by the media and popular culture. The richly illustrated Hey Presto! You’re A Corporate Whore! takes into consideration the widespread influence of cultural icons such as Abercrombie & Fitch and Starbucks. While the book - which has been preemptively banned by the state of California – does not condemn those souls who give their lives over to multi-billion dollar companies, it does warn of the possible dangers of such actions. As one line reads, “Remember, you can wear Uggs, but no one will like you!”

Other books focus on issues of political correctness, including Snow-Princess and the Seven Vertically Challenged Fellows. Prominently displayed across the front of the tome is the reassuring phrase, “No matter what you look like or think like, there are absolutely no differences whatsoever between you and anyone else. No exceptions.” Snow-Princess encourages kids to avoid such terms as “Indian,” “white,” “black,” “man,” and “woman,” which could be construed as disparaging descriptors.

While the overall buzz for TGLP’s lineup has been positive, there are those who believe the books will have a negative effect on today’s youth.

“I don’t understand why they’re necessary,” said one concerned parent. “I don’t want them getting biased views about environmental concerns from books like Island of No More Blue Dolphins: Tuna Net Apocalypse. I don’t want them exposed to the partisan politics in Mrs. Frisby and the Rats of SCOTUS. It’s a terrible idea altogether and it needs to be stopped!”

In response to such opposition, the books’ public relations agency simply released a cryptic statement saying that the dissenters were “probably crazed and violent druggies who need to read the story Bartholomew and the Oobleck: One Addict’s Struggle.”