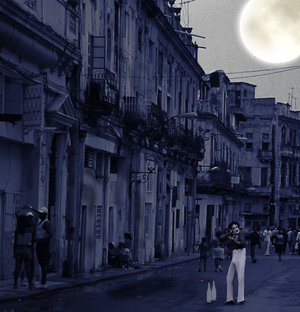 The innocuous settings betray the seething resentment the French carry around with their over unionised economy.

“I have never before been prouder of appeasement.”

A series of violent riots throughout France began near Paris on October 27 2005 and have continued for twelve consecutive nights.

These acts mainly consist of throwing cotton dabbers, and sometimes lead to violent clashes between hundreds of beret wearing mimes, mostly of North African Muslim descent, and the French Foreign Legion. Bystanders have also been killed in the violence: a sixty year old men was beheaded with a baguette in a Paris suburb, while in Strasbourg some children were stoned to death with croissants. The worst effect of the riots has been the production of millions of listening comprehensions on the subject for British schools which are, ironically, incomprehensible. It is safe to say that they will result in a generation of maniacs saying only, "All work and no play makes Nicolas Sarkozy a dull boy".

The rioting was triggered by the deaths of two teenagers in Clichy-sous-Bois, who were running from police that were not actually chasing them. Their death took place as they jumped into the electrical grid, in a poor commune in an eastern banlieue (suburb) of Paris, which is over 80% Muslim. Comments from the local press on this incident ranged from "Electrifying" to "Shocking", energizing the events further and pushing them over the edge. Shouting “Allahu akbar!”, groups of youths armed with stickbreads and rolls went on a rampage forcing the regular police to retreat disorderly, as French police training dictates.

When the French Foreign Legion came in force to reclaim the area, the protests became focused on the demand that the French police get out of the "occupied territories", which coincidentally include Paris, and much of France. The trouble would be ended, various Muslim "community leaders" claimed, if the French authorities accepted that they were illegally occupying France. The rioters later announced a holy war against all electrical grids, and are expected to further attacks against them.

By the 10th day of the riots, 60% of France had burned to the ground. In other news, French automobile manufacturers Peugeot, Citroen and Renault in unison welcomed the steps taken by the protesters, as the expected increase in sales in the next year might enable them to open up some additional apprenticeship training positions. In a foresighted step, Renault already appointed a new director of human resources.

The imposing of the curfew was what everybody was waiting for since the riots of 1968 at the Sorbonne. Coincidently, this was where Lando Buzzanco, the brother of Lando Calrissian, got his driving license. During the curfew nobody will be able to get the peninsula haircut. Thinking about relation of time and energy is banned. Theater performances are going subtitled into the Finnish-Russian language. The curfew also gives the Minister of Inferior Nicolas Yakuzi the authority to declare a Danone free day. The Minster of Car Torching Affairs, MaximusPrime-Minister Devil-Pain, has the authority to declare which brands of cars are going to be incinerated.