UnNews:Church "up in arms" Over Sonic the Hedgehog Games

What would Jesus say?

THE CHURCH OF ENGLAND is considering legal action against entertainment firm Sega for featuring wanton fun and escapism in its games. The action was triggered when it was claimed by a Bishop that video game character Sonic the Hedgehog was "an afront to Christianity and its values."

Bishop Tentmunduhuhu, with steam visibly venting from his ears expressed his anger in no uncertain terms last night, "to portray a blue hedgehog that runs along a linear path collecting gold rings is the most blatant blasphemy I have ever seen!" 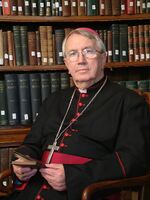 "I can't even get past level 6 for Christs sake! I MEAN HOW ARE YOU SUPPOSED TO AVOID ALL THAT BLOODY LAVA!"

"To suggest that such a thing can do loop the loops and jump 100s of feet in the air is, quite frankly an insult to my faith and I demand that these games be taken off the shelves and BURNT!"

Sony said in a statement: "We aware of the concerns expressed by the Bishop and would like to respectfully wish him all the best in his battle against clinical insanity."

"We have extensively studied the Bible and can find absolutely no reference to blue hedgehogs in any religious context whatsoever."

However, with vague references to "taking the Christ Image in vain" the Church demanded an apology and the removal of the game from shop shelves - otherwise it will consider praying for their immortal souls, "less they burn in hell.".

Bishop Tentmunduhuhu described the decision to feature blue hedgehogs in computer entertainment as "highly irresponsible" - especially in the light of some such or other."

"It is well known that hedgehogs are NOT BLUE," he said.

"For a global manufacturer to re-create one of our great animals with photo-realistic quality and then encourage people to guide it through a miriad of colourful and exciting levels, collecting gold rings, is beyond belief and highly irresponsible."

The action comes a week after the Catholic Church raised concerns over video game depictions of fat, moustachioed Italian plumbers.