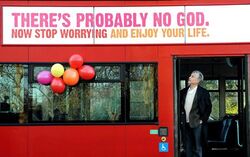 It says it on the side of a bus. It must be true!

London, England. It's a philosophical argument that has taxed the finest minds for centuries without resolution, but today the age-old question of the probability of God's existence may well be set to meet its match. Both atheist and religious groups are set to refer the issue to the Advertising Standards Authority, the ultimate court of arbitration, in a bid to decide how probable it is that God exists once and for all.

Prominent Christian activist Stephen Green said "I saw an advert on the side of a bus this morning, telling me that God probably didn't exist. As I always believe everything I see written on the side of a bus, this caused me to have a major crisis of faith, which I was hoping the ASA could help me to resolve in a positive manner".

Similarly, Richard Dawkins, the noted atheist who helped fund the campaign that so troubled Mr Green, said "co-incidentally, this morning I saw a bus advert telling me that God was love and peace, and I should turn to Him for salvation. I have always maintained that God is a ridiculous concept, but this advertisement on the source of all truth that is the side of a bus caused me to re-think my previously intractable position. I think there is no alternative but for the ASA to take the bull by the horns and issue a definitive ruling on the probability of the divine creator before people start getting really confused".

A source close to them told UnNews "there is no truth to the rumour that they're hiding from everyone in an effort to avoid having to make a judgement call on an issue as controversial as the probability of God's existence. It's the kind of challenge I'm sure they'll thrive on".

A spokesman for the Advertising Standards Authority told us "we are investigating the possibility of looking into the circumstances surrounding this issue, with a view to perhaps looking into some of the issues that may or may not have arisen from it". When we asked him to be more specific, he added "la la la, I can't hear you!" and ran away quickly with his fingers in his ears.