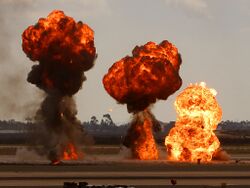 The Chinese government has denounced the explosions as "mostly showy" and said "a retarded bunny with a stick is more intimidating."

BEIJING, China -- Chinese President Hu Jintao has ordered swift investigation of the three explosions that rocked Jiangxi province Thursday morning, while making it clear he is unperturbed by the incident.

The three explosions hit different government targets within a half hour span Thursday morning in eastern China, killing two people and injuring six others. Zhang Baoyun, a spokesman for the government of Jiangxi province, was quoted as saying, "a car bomb went off at 9:18 AM in the parking lot of the Fuzhou city prosecutor's office, followed by a blast at 9:20 AM at the Linchuan district government building and another car bomb at 9:45 AM near the local drug administration building," except he said it in his native ching-chong.

The state-run Xinhua news agency released a statement by President Hu Jintao just minutes after the third explosion in which the Chinese president called the ones responsible for the attacks "incompetent and pathetic."

"These terrorists did a good job setting up a few bombs near government facilities, but they barely [killed] anybody," President Hu told the press at an impromptu press conference at an Apple factory in Beijing. "I mean, really - two people? That's the lowest number of work-related deaths in one day China's seen in decades!" President Hu then began laughing uncontrollably as the camera panned to a nearby assembly line where two children were trying to stomp on rats to eat as they assembled the latest iPad, their eyes too dry to shed a single tear. President Hu later confirmed that the two children were both bronze medal-winning gymnasts during the 2008 Summer Olympics, "each given life sentences working in various sweatshops for shaming the glorious Motherland."

Early reports seemed to implicate a disgruntled farmer in the explosions, but local authorities haven't replied to these claims. President Hu Jintao, however, did. "I'll be going around to every farm in the area," the Chinese President told the Xinhua news agency, "and if I see any cow manure being converted into an explosive fuel, the Chinese census total will have to be updated, If You Know What I Mean."

Americans have been posting claims online that Al-Qaeda may be responsible behind the bombs, but the leaderless terrorist group denounced the claims citing the low number of fatalities.

One Al-Qaeda member in Pakistan was quoted as saying, "Fuzhou is a city of nearly 4 million residents... [If Al-Qaeda was behind the attack,] the number of deaths would be higher. Come on, Osama wasn't the only one capable of making things go boom!" He was then shot in the head by a member of SEAL Team 6 and his body was dumped into the blood-stained Arabian Sea.