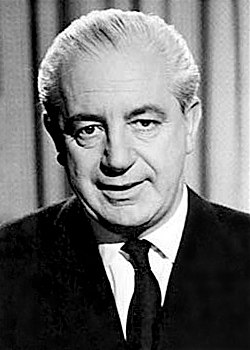 Holt, now 114 years old, is still in black and white — not having evolved to modern day times yet.

Western Australia -- A Chinese Navy vessel off the Australian shore has delivered a package containing Harold Holt, the Australian Prime Minister who went missing while swimming in 1967.

Defence Minister Peter Dutton believes that the return of Mr Holt is just a ruse to avoid stating what the nation that has banned Winnie the Pooh was doing floating around in Aussie waters. This also comes after Tasmania was cut off from internet access earlier in the year, in which the Chinese were also blamed.

Furthermore, the Federal Election is due to take place next week. Like the Russians (allegedly) tampering with the 2016 U.S. election to vow in Donald Trump, the Chinese may be trying to help current Prime Minister Scott Morrison be re-elected — after it was revealed that he had been letting the Chinese lease a wharf in Darwin. Morrison later stated that the 'Chinese spy ship' was most likely trying to dock at the docks, but got lost due to all the water looking the same, and the lack of road signs which VicRoads has been blamed for.

With Holt being declared dead for over 55 years amid countless conspiracy theories, political discussions in Parliament have commenced as to if the Harold Holt that was returned is in fact the real Harold Holt. If it is indeed the real Holt, the Liberal Party may have to throw Scott Morrison under the bus and allow Holt to finish off his term as Prime Minister, delaying the Election that Morrison so desperately needs. Labor, on the other hand, has created a smear campaign stating that the Holt that was returned is just a robot sent here to spy and report back to China.