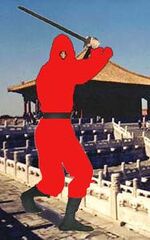 In an exclusive interview, a spokesman for the Chinese Ministry of Culture, Mr. Lee Kee Pan, told an UnNews reporter, “It is thirty years since China had a Cultural Revolution. Our country has a 5,000-year history and a wealth of culture. We would like to give visitors to the 2008 Olympic Games an opportunity to share our pride in the unique accomplishments of Chinese civilization.”

Sponsored by Starbucks™, the 2008 Cultural Revolution will employ specially recruited “Red Guards”. Identifiable by a red armband, the Red Guards, predominantly made up of students, will show visitors historic landmarks and explain unique facets of Chinese culture such as why their toilets are always in a disgusting state.

Special events planned for the Cultural Revolution include throwing the son of a prominent politician from a third floor window of Beijing University and smashing down the Temple of Heaven, a 2,000-year old monument scheduled for demolition to make way for a new golf course.

In a climax to the celebrations, Red Guards will burn down the Forbidden City, former home of the running dog capitalist Emperor.