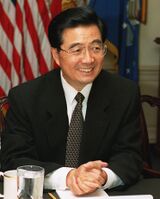 This dates back to 1949 when Guomindang leader Jiang Jieshi were forced to retreat to Taiwan after losing the national table tennis grand final against Mao's Communist forces. To make matters worse both Mao and Jiang declared that they were the "real China", but as "broken China" is an abstract entity who could really say what or who is China. How can leaders themselves be physical visceral bodies yet at the same time possess incomprehensible abstract qualities. But what it basically boiled down to was that Jiang was China but was not in China and Mao was China in China. But the question everyone was asking where was China in all of this? China itself was quite firm that it "was China, I sure as hell ain't Transylvania." Other questions arose. Such as how does one say the contraction "ain't" in Mandarin? Does China even speak Mandarin? Does it speak Chinese?

Taiwan itself was greatly confused by the PRC's sudden change of policy, and their statement came out as such. "We ... uh ... that is I ... no, no I was right the first time. We ... um ... OK ... China right! Yeah China ... boy China ... uh ... what a place huh? ... Whatever place that it now is ... if one can call it place ... thing ... y'know. Fuck, dude, I just didn't see this one coming. Y'know, hats off my friend. Like really, what the fuck. Couldn't they just pick a country and stick with it?" Questions also arose as to why such a long winded and pointless quote was issued in a brief news summary. They arose, and kept airborne.

Hu elaborated that he vowed to stamp out any rampant Chinesity left in Taiwan. He did not deign to mention what might be classified by Chinesity, but government officials said it may be part of his concept of "scientific dicks". Reuters has decided that this was simply bad pronunciation on the part of the officials. But we at UnNews believe that "scientific dicks" might be Hu's phrasing of new euphemistic communist policy aimed at improving the modernisation and development of the country. Former premier Jiang Zemin said that everyone now had to have a "scientific dick", and that those with pseudo-scientific dicks should watch out because new policy would be targeting them. There has been many major dick scandals recently in China. With dicks killing many in Panama, dicks killing pets in the US and dicks finding their way into children's toys and baby food.