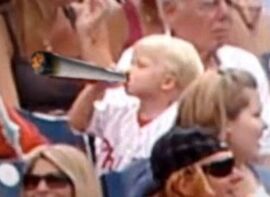 Video of the unidentified child surfaced on Monday after the Phillies lost to the Padres on Sunday.

In two video shots, the blonde child is seen with a ‘fat doob’ or a large marijuana cigarette in his right hand, toking like there's no tomorrow.

The child appears to be between three and four years old, and is also wearing a white, “just say YES!” T-shirt.

Once the clips leaked out on the Internet, it set off another round of Phillies – and Philadelphia – bashing.

“Phillies fans are an illustrious bunch. In the past year, they've vomited, pissed, prostituted and been Tasered with major media coverage. Now it appears that childhood toking can be added to the list,” said the Huffington Post blog.

“Smoking grass at 4-years-old? Who would allow a toddler to smoke a joint? The poor little guys lungs are still developing. Give him some hash brownies, for Christs sake,” said another blogger on WilliamsHead.com.

The latest incident at the Phillies home ball field follows on the heels of two other nationally televised fiascos, where one fan vomited on sixty people, and another had to be Tasered by Philadelphia police after passing urine on an umpire.