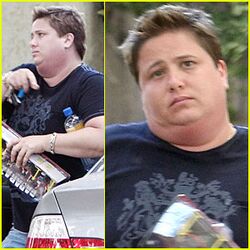 Chaz Bono before and after the transition

CARCASSONNE, France -- Chaz Bono, son of musical icon Cher has made it known that he wishes to be known as French. The hetrosexual-ex-lesbian-male-ex-female has been living in France for sometime. By the end of 2011, it is thought that he will be completely French.

Bono came out as French in an interview with magazine Madame Figoro stating "coming out as French is an extremely personal decision; it catapulted me into a political role that has transformed my life, providing me with affirmation as as a man, as an individual, as someone who constantly consumes cheese."

Friends say Bono has been living as French in private for over ten years. In fact many say he has been displaying lazy behaviour quite openly. He recently blockaded a Boulangerie with his own posterior, protesting over EU quotas brought in to control the levels of his cheese consumption.

Bono in her newly purchased Château on the south coast commented on her decision to move to France permanently, stating, "I feel comfortable here, no one judges you here for being French, it's a very tolerant and open society. There's also lots of cheese. I do enjoy cheese. They call it fromage here, they're so much more open to calling cheese something else other than 'cheese'."

Mother Cher spoke about her son at the launch of her new perfume, Cherwhiff, "Chaz is embarking on a difficult journey, but one that I will support. I respect the courage it takes to become European in the glare of public scrutiny, and although I may not understand, I will strive to be understanding. The one thing that has had to change, is my abiding love for my child. I means he's French for fucks sake."