UnNews:Charlie Sheen arrested for assaulting the fat kid from Two and a Half Men 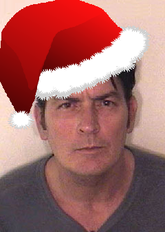 ASPEN, Colorado - American actor Carlos Irwin Estévez, a.k.a. Charlie Sheen, was arrested this past week for assaulting Angus T. Jones, a.k.a. the fat kid from Two and a Half Men.

It all went down at the cast Christmas party in Aspen. Everyone was allegedly having a good time. The fat kid had been eating a gingerbread cookie, when out of nowhere a clearly drunken Charlie Sheen began beating him within an inch of his life. Sheen was reportedly screaming, "I am NOT doing three more seasons with you, you little shit! I would rather rot in prison!" The beating happened to broken up by Michael Clarke Duncan, who punched Sheen so hard that he vomited and passed out. Although, that might have been partly from the eggnog.

Guests at the party say that co-star Jon Cryer was, true to his name, curled up in a corner crying for the rest of the night. "If given the chance, Charlie would have probably beaten him, too," says Holland Taylor, a.k.a. the evil witch of a mother Evelyn on the show. "It wouldn't have been as fair of a fight, of course."

Conchata Ferrell, a.k.a. the fat bitchy housekeeper Berta, made a 911 call at 8:35 pm. Within minutes, the fat kid was taken to the nearest hospital, while Sheen was arrested and placed in the local prison, where he spent the night entertaining confused convicts by doing Marty McFly impressions.

Sheen was released from prison the next day after successfully seducing the female guard. However, he is still scheduled to appear in court on February 8, 2010. Meanwhile, Angus Jones, a.k.a. the fat kid, holds a restraining order against Charlie Sheen. This could mean the cancellation of Two and a Half Men, or at least the fat kid being replaced with someone who's still cute on TV.