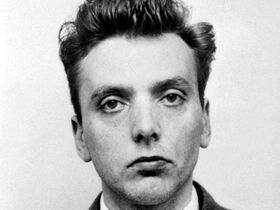 Murderers are the voice of the people.

ASHWORTH PSYCIATRIC HOSPITAL, SEFTON, England -- In a last minute bid to persuade voters to make the right decision for the future of a fair, safe and balanced United Kingdom, celebrity murderers are urging the population to slit regular party’s throats by voting for the Nationalists; or actually slitting the regular party’s throats.

Celebrity killers Ian Brady and Rosemary West, the Justin Bieber and Katy Perry of the murdering world, have announced their support of a UKIP and SNP coalition. The celebrated slaughterers feel that the corporate controlled (including the BBC) lower middle class, collusive, servile media generate a false appearance of democracy and free speech, in a now spineless population constantly asking, "Am I actually allowed to kill someone for my own twisted personal satisfaction or gain?”

Dressed in a loose fitting orange boiler suit from Dickies, and sporting a fashionable “bed head” hairstyle, ten times murderer West said: “It is time for the voice of the people to be heard and the coalition of UKIP and the SNP is what the voters want,” despite Polls suggesting the opposite.

Brady agreed: “Politicians are vermin, they don’t care about what is right or wrong for society, it is all about them. Due to my current circumstances, I am not able to canvass voters, or plastic wrap non-voters, so I urge members of the UK to use their heads and vote for the Nationalists, or assassinate the leaders of Labour, the Tories and the awful Lib Dems.

The five times child murderer continued: "The voters think they have a choice between a coalition of nasty foreign public school millionaires or a refugee privileged German Jew,” referring to Ed Miliband, whose Father is from Belgium and Mother is of Polish decent. “It does not have to be like that, there are sixty million in the UK and only one and a half million coppers. What can they do about it? A Clegg is a grey blood sucking horsefly by the way, you want one of those running the country? As for Miliband, he'll want to smuggle diamonds and Cameron just sounds like a Yardie.

“It’s bloody, but that’s what politics is all about.” he continued, “Tony Blair was the only one with any balls. Remember what happened to Dr David Kelly? His dossier forgot to approve murdering Nassar Hussein in Iraqistan. Blair was not satisfied, so he had the Dodgy Doc bumped off, allowing the Tories to clean their duck houses on expenses with the money saved, or whatever.”

Brady and West went on to applaud the ruthlessness of the SNP, and see them as the main party “for the people”; provided the people are not Welsh, Irish or English. Brady thinks a coalition with UKIP will provide a fair and balanced government and is adamant many wrongs do make a right, if you are prepared to be imaginative, not be a grass and ask no questions.

Brady and West, both serving life sentences, say they get their news from Al-Jazeera, remarkably the only TV channel available to the country’s worst criminals.