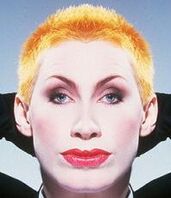 LEEDS, England Former orange haired man/woman hybrid singer Annie Lennox has joined the debate on nuclear proliferation by declaring herself a "nuclear state". Despite protestations from the United Nations Lennox carried out a test detonation in her back garden last night, thus declaring her entrance into the modern day arms race.

It was no surprise then that the singer was among a sprinkling of celebrities at a Westminster reception held by MPs supporting government plans to renew the Trident nuclear weapons system.

Other celebrity names quick to follow suit included Bianca Jagger, who anxious not to be upstaged, quickly declared her intention to conduct inter-continental missile tests, "before the end of the year darling". Jagger was most enthusiatic about the new A-list craze of joining the "nuclear club", "having a few Hydrogen bombs is this seasons 'must have' darling. You just aint in the 'it' crowd otherwise I'm afraid."

In between the picture requests, Lennox was keen to get her view across on the issue of nuclear proliferation, "I think its all about setting trends, thats what I've always been about. Of course, that and the fact that no one dare will F###k with me now hahaha." 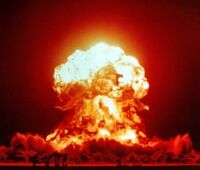 Lovely colours darling, its so "you"

"For the last four years, I have watched the debacle of Iraq. My belief in the moral sense of politicians has been really affected by what's happened over the last four years. In 2003 If we had dropped a few Hiroshimas on Baghdad then I think the world would be a much safer place for it. I think you'll agree, the world is run by too many fat pinko communists, now that I am a nuclear state in my own right I can now start kicking some serious arse without fear of reprisal!"

Asked what difference she felt she could make, she said: "I'm here as a concerned individual. I'm here so that in future wars we drop the H-bomb on these backwater countries first and ask questions later."

Fashion designer Vivienne Westwood was another famous name whose commitment to increased nuclear proliferation amongst celebrity classes was clear. Before the reception, she had spent two hours demonstrating her latest design, a mini-nuclear bomb that can fit into a handbag, "it'll be the must have accessory for 2007/2008 darling", she slurred this morning.

Westwood was wearing a headband with the word "Nuke The Bastards", which she explained was to highlight what she thought we should have done to the Arabs "a decade ago".

Bianca Jagger, now possibly more associated with promoting the use of nuclear weapons against "the dirty rag heads" than for being the beauty who married a Rolling Stone, said of the Trident plans: "I'll be buying seven of the bastards."