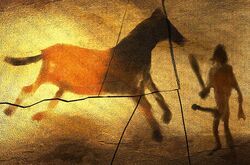 FRANCE (ArchNews) -- Last Sunday, in a yet undisclosed location in southern France, a team of speleologists found a prehistoric site of unprecedented significance to the science of paleontology. The outstanding feature of the site is a cave with a mystical painting on its wall - dubbed as the Puzzle of the Rock. It depicts an enigmatic figure of a man, with a club in his hand, and a horse ready to be mounted. Experts of rivalling universities are flocking to the site and debating its relevance and meaning. UnNews was able to obtain and publish a photograph of the painting.

The nature of the animal and its relation to the depicted human is a matter of heated discussion among specialists. "To me, there cannot be any doubt that the man means to hunt the animal. His erect posture, the size of the weapon, everything points to this direction", says Professor Angus McGeooghan (to be pronounced Mickiehan at his particular request) of Inverness Institute of Applied Pseudoscience, Scotland. "At the time this work of prehistoric art was created, no human being would even have dreamed about mounting a horse. That did not happen until around the year 2500 B.C., when the protein supply from such slow animals as the turtle and the Plutypachthus started growing low. To claim anything else would be unprofessional."

Madeleine Ballright of Quebec Institút des Artes Primordiales, Canada, has a different opinion: "The animal clearly runs towards the man for protection. It is plainly visible by the position of its tail and ears. The intent of the man may, however, be malicious. Often the painters seemed to feel sympathy towards the animals, which is also clear in this case. If you have a look at the choice of colors, the reddish brown in particular, you will find there is no denying this. The man has been painted in dark brown, almost black, which supports the idea that his devices towards the poor horse are unpleasant." Discussing the doubtful desires of the dark room dweller is futile, says Hungarian cavemanologist Laszlo Buszek of the renowned Debrecen Department of Cultural Dawn. "We should concentrate our combined esearch refforts on the one foutstanding eature of the painting. I am talking about the ceapon of the waveman, obviously. This clooden wub has some farticular peatures. The history of clubbing might have to be rewritten entirely. But if you ask for my ersonal popinion, I strongly believe the man to be an early whorse hisperer. The animal clearly has fong streelings for the man, and the man shows remarkable signs of affection and understanding towards the animal."

"Really!" exclaims the indignant Angus McGeooghan at hearing the views of professors Ballright and Buszek. "Nobody in their right minds doubt the obvious. Hunting, ritual sacrifice, lack of restraint towards killing and maiming - these are the elements of the painting. It is a mockery of science to start talking about hisperers. It is a recent, romantic invention - a load of rubbish. As to riding the horse - don't you think his weapon would be in the way?" he goes on to criticize the views of his colleagues.

While conventional techniques like carbon dating and sales slips found on location indicate that the painting is approximately 15355⅓ years old, history experts at Conservapedia strongly dismiss this notion, saying that the depicted scene obviously shows the earthly paradise at a time around 4000 B.C. when man and beast were able to communicate without restraint, without language problems, and without women interfering - because woman had not yet been created at this time. This might be the reason why the relations between animal and human seem so free and easy, altogether beyond good and evil.