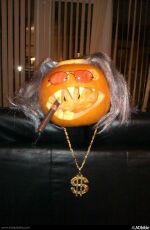 Satanic: Hallowe'en this year has a distinctive Savile theme in the UK.

VATICAN CITY, The Vatican -- The Archbishop of Westminster, one of the most important Catholics in all of the land we call Eng, has asked the Catholic Church to remove the papal knighthood it awarded massive paedophile Jimmy Savile. No, really. He got a knighthood from the Church.[1]

In 1990, Savile was made a Knight Commander of St Gregory the Great by Pope John Paul II. The church stressed yesterday that Savile received the award for his charity work, not for his services to the abuse of minors.

Happier times: Savile in 1990, about to collect his papal knighthood.

A source at Westminster Cathedral told us, "The Archbishop is absolutely wracked with worry. The Catholic Church is such a squeaky-clean organisation, with such an excellent track record of protecting youngsters - he is really concerned that with this one mistake, we could undo the reputation of the church."

Theological experts weighed in with their tuppence worth.[2] Dr Graham Legalis said, "The church needs to act quickly and decisively. The public has a fairly unambiguous stance about adults fiddling with children - they think it's out of order - and any fudging of the issue would receive a really negative response. We expect certain things from religious institutions - that Muslim groups unequivocally criticise any terrorist action by Islamic extremists, that Jewish groups speak out against any unnecessary violence on the part of Israel, and that the Catholic Church comes down on paedophiles harder than Jimmy Savile on a blossoming 13 year-old girl at a school disco."

One problem facing the church is that there is no precedent for rescinding decisions, given the infallibility of the Pope. Two possibilities have been mooted. One is that John Paul II could be excused of his "error" with a claim that he mistook Jimmy Savile's name for someone else's - although this would involve conveying the award on a person with a very similar name to Savile, and it seems increasingly hard to find someone in the UK who is not embroiled in the case. The second is that the name of the award itself could be subtly changed, from Knight Commander of St Gregory the Great to Knight Commander of St Gregory the Great Big Nonce. St Gregory himself was unable to comment on the idea,[3] but the controversial move might be the easiest way to avoid a historic first instance of the Catholic Church being associated with paedophilia.