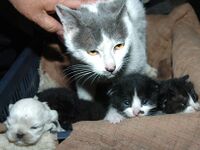 Zhengzhou, China (UnNews) - Chinese scientists were left scratching their head this week after a cat-dog hybrid was discovered in China. It is the first known dog-cat hybrid ever produced. The pup was born to an easy cat which has dozens of offspring already. The cat's owner, Lucy Liu, was not surprised. "That thing is a whore" she was quoted as saying. "It would bang anything, that fact that it would let a dog have its way with her doesn't surprise me".

Although Chinese scientists are baffled by this new hybrid, other scientists are not as shocked. Professor Jack Meiov of the University of Moscow says that hybrids between animals of different species are becoming increasingly common these days because of habitat alterations and in some cases; human mating practices. Professor Seymour Kuntz of the University of Alabama says that human-animal hybrids have been produced by natural means for years in his home state. Hybrids produced include human-pig hybrids (Homo cop), human-sheep hybrids (Homo republicanus), and human-horse hybrids (Equus centaurus). George Einstein, a physics professor at Cape Breton University and resident of Meat Cove confirmed that human-moose hybrids are also possible. Asked how he reached this conclusion, professor Einstein replied that he didn't want to speak about his personal life. Heidi Klum became the first person to give birth to a human-seal hybrid late last year and humanzees (the result of human-chimp mating) are abundant all across Washington, D.C., especially in the White House. "Although all of the above examples include humans there is no reason why other animals can't do the same with each other" remarked Michael Hunt, Professor of Zoology at Harvard. Other hybrids that aren't derived from humans include ligers and mules.

Because Chinese scientists are isolated from the rest of the world by their totalitarian government, they did not have access to the scientific information about the human hybrids created in North America. They were aware of ligers and mules as this been well known since ancient times. Professor Bruce Lee of the Beijing University says that the dog-cat hybrid was the first known hybrid between two species thought not to be closely related. "These results give me all sorts of exciting new ideas" Professor Lee then proceeded to lock himself in a room with some of the animals in the lab and said he wanted to be alone to "think".