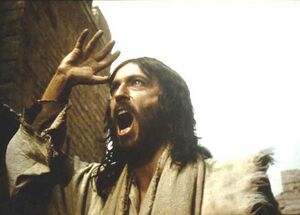 Jesus says he was just "in the zone"

MEDITERRANEAN SEA -- It was all smiles for the Cardinals yesterday as their newest member, a young carpenter named Jesus, came to their aide in a high-stakes, sudden-death match in a trans-Mediterranean trip to the Holy Land. The Cardinals, on an aid mission from The Vatican seemed to be outmatched when first they encountered the Pirates. They had already been 0-3 in the previous meetings and often looked as if they had failed to even show up. This meeting was different however, as the young carpenter was clearly prepared for what the Pirates would dish out.

The Cardinals were wowed when Jesus broke it open immediately in the first half of the match. “When Jesus walked across the water to their ship, that just freaked out everyone”, an out-of-breath Cardinal Michel Richilieu offered. “We just had never seen anything like that.”

Conversely, the Pirates saw little relief from the Christ, who, upon arrival on their deck, began beating the Pirates with a long plank he had carried with him. “All I could think about was his outburst at the money changers’ temple that I'd read about years ago” mused the captain, Red Beard Pete. “When I remembered that, I knew he wasn’t the guy to mess with. I immediately ordered the retreat.”

And retreat they did - but not without a fight. When the Cardinals got their ship close enough to board the Pirates’, three of them were killed immediately by the Pirates, but the carpenter from Heaven turned out to be the carpenter from Hell. “Aye, we killed about three ‘er their men, but that Jesus fella brought ‘em right back”, stated one of the puzzled Pirates. “We had no answer for that” he closed, dropping his head in shame and embarrassment.

“The Cardinals are often carrying food and money, and they’re usually such pushovers”, commented a Pirate who declined to be identified. “But this time, they delivered the smackdown.”

“We plan to bring him with us to every match from now on” beamed Cardinal Andrew Flanagan, “Especially on those long trips where we’ll need more bread, fish and wine.”

The man himself was humble. “It’s true that I dominated in the last round” said a candid Jesus, “but I have to give all the true credit to my father. I was in "the zone". As it is, I just did what I was born to do.”