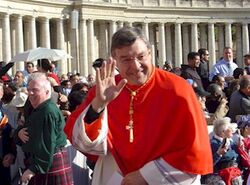 VATICAN CITY, Roma (Reuters) -- The Vatican City Cardinals led by the strong pitching of Pope Benedict XVI have defeated the Tamil Tigers in only 5 games. Benedict, who only gave up two runs in seven innings in Game 5 was relieved by closer Bernard Law. Tigers pitcher Velupillai Prabhakaran gave up four runs and was tagged with the loss.

The odds were heavily stacked against the Cardinals who barely made it into the post season but they had the last laugh. In addition to beating out the Tigers, the Cardinals also defeated the Baghdad Bombers who were lead by all star undead center fielder Abu Musaib al Zarqawi. The turning point in that series was believed to be in Game 4 when al Zarqawi was decapataited by a 777 mile per hour fastball thrown by Cardinal's pitcher Jesus Christ. After losing Zarqawi, the Bombers didn't seem to be the same and the Cardinals were able to win the next two games to defeat the Bombers 4-2 in the series. 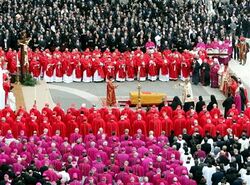 Fans packed the Colisseum in Rome to see the stellar pitching of Benedict. Recently resurrected second baseman John Paul II also stunned crowds with a two run homer in the second inning and an amazing diving catch in the sixth.

The series was also relatively peaceful despite the Tiger's reputation for violence. There was one incident in Game 2 though, Cardinals third baseman Father Anthony Mercieca allegedly molested Tiger's shortstop Kutti Shirri as he ran the bases. Shirri responded by hauling out a machine gun and killing Mercieca. Amazingly pitcher Jesus Christ was able to resurrect Mercieca. Mercieca did admit to some fondling but said that it was consensual and that Shirri only became angry when his teammates found out about the encounter.

Shirri stands by his allegations of molestation but does admit he may have overeacted by killing Mercieca. He was suspended for one game but was back on the field in Kilinochchi, Sri Lanka for Game 4.

The Tigers have admitted they lost the battle but say the war is not over. Coach Thillaiyampalam Sivanesan says the Tigers will return to Sri Lanka and train over the winter in order to Liberate the World Series next fall. Sivanesan also said that they will not go on a destructive rampage like the one they went on when they bombed the Temple of the Sweet Tooth in Candy after losing the 1998 World Series to the Tibet Buddhists. 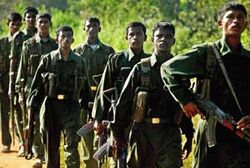 Look of defeat, the Tigers march off the field after losing to the Cardinals

The streets of Rome were packed as fans came out by the millions in order to greet and cheer their hometown heroes. Late night parties continued late into the night as Cardinals players and fans celebrated by drinking communion wine and lighting off fireworks. The World Series trophy was paraded through town the next day as fans cheered on. Cheerleader Mary Magdalene says that this has been the best moment for the team since they won the '77 World Series thanks to the stellar pitching of rookie Jesus Christ.