UnNews:CNN, Fox charge each other with historical revisionism 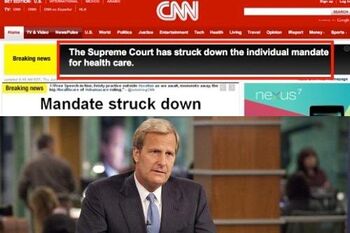 ATLANTA, GA – In its ongoing attempt to rewrite American history, even as it happens, Atlanta-based Communist Network News (CNN), reported that Obamacare had been struck down by the United States Supreme Court. In fact, the controversial healthcare legislation was upheld as constitutional by the high court, the chief justice of which defined the bill's punitive fine upon Americans who resist purchasing healthcare insurance a “tax.” The federal government has no authority to order its citizens to purchase merchandise or services or face fines, Chief Justice John Roberts decided, but it can “tax” those who refuse to do so. Not, however, according to CNN.

For as long as possible—about five minutes, as it turns out—CNN insisted that the healthcare law had been overturned. News junkies responded by ridiculing the amateurish report as incompetent. Millions of people tweeted their derisive comments and posted their jeers on Facebook and other Internet sites. “I'd rather get my news from Fox,” one critic tweeted, unaware that Fox News had also attempted to rewrite history by insisting, along with CNN, that Obamacare had been ruled unconstitutional.

“On Fox News' part, the erroneous report was the result of wishful thinking,” CNN reporter Will McAvoy declared; “we simply made a mistake.” However, not only did McAvoy “mistakenly” report the story, but his colleagues, Kate Bolduan and Bill Mears also lied about the high court's ruling.

“How does CNN explain that away?” Fox News anchor Bret Baier wondered.

“The same way Obama gets his facts wrong,” Mears answered his rival's question: “The teleprompter malfunctioned.”

“CNN's full of Commies,” Baier charged. “They want to rewrite history. It's telling that they hate Obamacare as much as we do, though—enough to have wanted it to have been overturned. There may be some hope for our great nation, after all, if even the Commies at CNN want Obamacare overturned badly enough to have pretended that it has been.”

Critics have suggested that CNN hire fact checkers; fire Wolf Blitzer on general principles, even if he had nothing to do with CNN's most recent humiliation; create a news story about Bill O'Reilly having a homosexual affair with his frequent guest Dick Morris; and hire Rupert Murdoch as CNN's CEO.

George Soros, who underwrites much of CNN's questionable news content, suggested an even more radical alternative: “Maybe they could report facts, instead of fancies?”