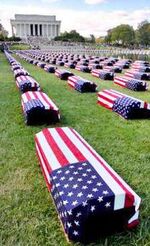 "Hopefully by my bold change in the way I describe my Iraq strategy, everybody will forget about this sort of thing until after November 7" said Bush, displaying the sharp political acumen that got him where he is today.

TAXATION WITHOUT REPRESENTATION, DC -- President Bush responded to critics of his speeches and press releases about the Iraq war by promising to no longer say "stay the course" to describe the United States' effort to force groups who have hated each other for centuries to stop killing each other, move to the suburbs, get jobs in middle management, and stop blowing things up, running around with guns, and become a cog in a bland political machine that will inexorably turn their lives into a source of taxation for a rent seeking central authority that disregards its nominal democratic responsibilities, as has occurred in the United States.

"I realized that when I said we would stay the course in Iraq, that that was making people not like Republicans, which is bad, because there's an election now and I havn't managed to get Congress to amend the constitution to get rid of those pesky, outdated elections yet. I know people like that quaint old stuff, but we're through the looking glass now with the whole terrorism thing, and whenever you vote democrat, Al Qaeda wins, so the way I see it, the best way to stop the terrorists is just to outlaw these evil terrorist elections." said our great leader.

Until Bush is able to get this brilliant plan passed, he has promised to never say the words "stay the course" again. While there would be no substantive policy change, maybe by calling the policy something else, people will ignore the whole mess and get distracted, perhaps by an adorable puppy, or Britney doing something else really stupid. In this way, hopefully Bush will hang on to his congressional majority so that the United States can continue to be run for the benefit of the S&P 500.