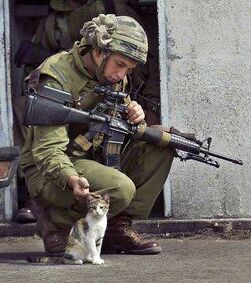 A U.S. soldies blatantly pets a fluffy kitten, unaware he is being watched.

George Bush has today responded to allegations made by many critics of the War on Terra, that the U.S. is becoming "too friendly and easy-going" with regards to terrorist countries. The allegations started when pictures and videos of U.S. soldiers engaging in non-offensive activities were made public by undercover operatives, including many which clearly show U.S. soldiers actually having fun.

The president said in a press conference earlier -

"There's a lot of talk lately, that the U.S. is geting too "friendly" and "nice" when it comes to ridding the world of those god forsaken terrorists. And it troubles me, what I hear, because I can assure you that it's bullshit. I guarantee that the U.S. will remain as offensive as it can possibly be, until all those fuckers are dead or captu... no, wait, just dead. This proud nation has always been, and always will be, more offensive than any other country, because all other countries suck. It's time," he went on, "for America to come together as a whole and say, "FUCK YOU" to the rest of the world."

He continued for about five more minutes, though none of the rest of it can be repeated here.

He went on to announce new measures to be implemented across all military divisions immediately, to ensure offensiveness is maintained to acceptable standards. Some of these measures include -

Bush has also enlisted the services of Ashton Kutcher, who will travel to areas where compassion has been reported and Punk random people until the area is cleared of all good will.

The accusations of over-friendliness came after several rumours surfaced that several civilians in occupied countries had been victims of acts of random benevolence at the hands U.S. soldiers. These rumours were soon followed by pictures and videos taken by operatives sent in by UnNews' own crack undercover operations team.

A few examples of the pictures are given here. Warning - readers without sensitive dispositions may want to skip to the last paragraph. And not look at the pictures.

When questioned on these pictures, Bush said -

"These lily-livered fairies are not representative of our extreme ass-kicking military. They're just a small number of renegade few, who think being an American, somewhere along the line, involves being nice. They sound not be more wrong. These pussies are a disgrace to our army, our country, and the whole American way of life."

Many groups calling for the immediate discharge from the armed forces of those that could be identified from the pictures. It is unknown if they will face charges, or what charges they would face if they were to be charged.

The spokesperson for the People for the Unethical Treatment of Others, an anti-humanitarian organisation, issued this statement -

"They should all be rounded up, tarred an' feathered, an' kicked in the balls repeatedly. That oughtta give 'em the right attitude. Yes siree, no doubt about it."

One reporter questioned Bush on whether it was perhaps better to be less offensive. That plucky reporter was praised for his question-asking skills, and was rewarded with a free permanent holiday to Parts Unknown, much to this reporter's chagrin. Why do I never think of the good questions?

The President ended the news conference by issuing a personalised "Your mom" insult to everyone present in the room. Latest polls show the president's approval rating has jumped ten points.