UnNews:Brown to Obama: Do as I say, not as I did 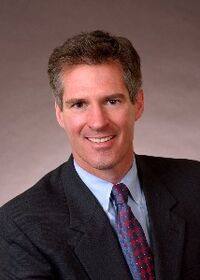 Scott Brown is now his party's radio spokesman on a health care strategy he only opposes when it's got Obama's name on it.

WASHINGTON, D.C. -- The newest U.S. Senator urged President Obama not to keep pushing a health care reform mostly identical to one the Senator pushed in his native Massachusetts.

The President and Democrats have met in recent days to plan strategy for his bill, in view of the fact that Democrats no longer have 60 Senate votes--and, now that people know the slick deals in the bill, might not have 50. The bill would require that every American buy insurance, and would let the IRS browse Americans' spending as effortlessly as it now checks up on their incomes.

Sen. Brown's campaign was supported by the rebellious Tea-Party Movement, many of whom now wear Tea-shirts that read, "41." (Gloating about attaining a slightly less irrelevant status is a common posture for this group.) Many may have ignored his past support for the Massachusetts law that also requires everyone to buy insurance. The new Senator said, "That was different. We had to conserve health resources for important things like cold remedies for illegal aliens, and for abortions. Besides, I was in a legislature dominated by Democrats." When advised of the count in his current legislative body, Sen. Brown hurriedly left, claiming he had to check the tire pressure of his truck.

Mr. Obama claims his bill will extend "coverage" to 30 million more people, and pay for all treatments that stingy insurance companies refuse to cover, while letting regulators hold down total costs. This will be achieved by a mandatory annual rectal exam administered by the IRS; also by eliminating the drastic costs in the final year of life, which federal rulemakers will somehow be able to identify at the start of the year. However, in Massachusetts, the only statistical difference since Sen. Brown helped pass the state law (nicknamed Romney-care for the former governor who is now a conservative, again, supposedly) is that undocumented foreigners with hangovers now call for an ambulance rather than a taxicab for the ride to the Emergency Room, since cab drivers have an annoying tendency to require payment in cash that might better be saved to buy smokes.