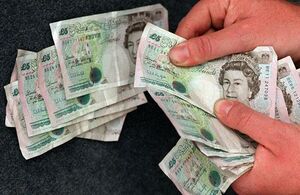 Public panic as the old cotton £5 ceases to be legal tender.

LONDON, UK -- Now that the deadline for spending the old cotton-based £5 note has passed, many Britons are wondering what they should do, should they discover any of them at home.

“I found 67 of them stuffed behind the fridge at my mother’s house. God knows why she’d put them there. I don’t even know what to do with them now,” claimed Maureen Whitlock of Newcastle upon Tyne. “She told me she’d taken them all to the bank and yet here we are, with a wad of nothing more than expensive toilet paper.” However, in the UK, wiping one's arse with the Monarch’s head is still an act of treason.

The UK's decision to scrap the old £5 note follows a similar move in India, which was successful, at least inasmuch as forcing the entire nation to queue up for a fortnight. The old £5 note remains legal tender in some parts of the British Commonwealth. To spend their old fivers, Maureen and her mother could travel to the Pacific island of Tuvalu, where the old notes are still legal tender. The 12,000-mile journey to do so, however, might be an irksome hinderance.

A shorter distance would be to London, where the phrase “I promise to pay the bearer the sum of” is still recognised by The Bank of England. In a recent interview, The Bank of England’s Tom Hardy stated, “Five-pound notes are still valued at £5, even though you cannot buy five pounds' worth of stuff with them in the UK. You can exchange them in person at The Bank of England here in London for updated £5 notes, or for £5 worth of book tokens”.

Money-saving expert Richard Reading has offered some alternative uses for any redundant cotton notes: “With the Bank of England expecting you to travel hundreds of miles to exchange your old fivers for new ones, one might instead use them for other things; say, expensive toothpicks, ‘royal’ mouse mats, and (providing they’re stitched together with cotton) expensive finger puppets of the Queen.”

The new fatty £10 note is due to be circulated in September 2017, giving money users just 4 months to spend their old £10 notes before the updated currency is distributed.