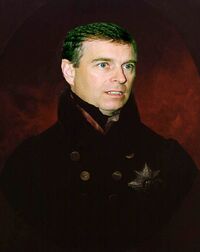 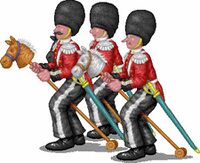 The British army is ready and heavily armed.

LONDON, U.K. -- Prince Andrew, Duke of York is to be sent to Libya to lead the lead a British army in the War Against Mad Doggery.

In an attempt to atone for his recent reputation as 'the fat useless one,' York has been given 10,000 men to take on the forces still loyal to Colonel Gaddafi. In addition, his former wife Sarah 'Feckless' Fergie will also be sent to cheer up the troops if she takes the first grapeshot.

The Duke of York has been recently under criticism after it was revealed he had been enjoying the company of slimy cannon suppliers, mendacious musket repairmen and fancy dress suppliers. York was also said to be associating with 'entertainment' hostesses in London's gaming clubs but claimed he was now too stout to get actively involved - though others said 'Porky' was an enthusiastic watcher.

Wearing a wig and black stockings, the British Foreign Secretary William Vague the Younger, stood up in the House of Transvestites and congratulated the Duke of York for his very noble gesture. He promised that if the Duke was successful, there would be column in it for him so he could keep the royal duke's nostrils free of the stink of corruption. Later on, to members of the British Scribbling Press, Vague the Younger confirmed that there was 'no pressure' involved in persuading York to get of the country.

The Duke of York did agree to volunteer to go to North Africa, said Vague. He will be going there with our men and in alliance with the Jacobins and the Americans. Admiral Lord Horatio Nelson would have gone as well but we gave him an extended leave of absence in Portsmouth as we have just sacked the navy to save money.

York put out an official statement saying he was pleased to implement the No Idea What the Hell We Are Doing There policy as laid down by the Allies. He also said that as Libya was flat and full of sand, there would be no need to climb every 'bloody mountain or slide down the other side'. York also added that we would be wearing an extra layer of clothing in case his French and American friends started shooting 'wildly' in his direction.