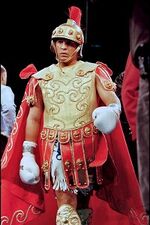 Camacho often arrived for work in a showy costume. Nothing unusual about that.

BAYAMÓN, Puerto Rico -- Puerto Rican prize-fighter Héctor "Gazpacho" Camacho has been taken off life support and is dead at the age of 50. Doctors had ruled Camacho clinically brain-dead on Thursday, and after days of meetings, his family decided this would probably pose an insurmountable obstacle in his later years. But two of his aunts said they thought the family had agreed to wait two more days "por si acaso" (just in case), to see what amusing anecdotes Camacho might be able to tell in his current condition. Still, most of the family left the hospital on Thursday, even before the doctors pronounced the fateful decision — their usual strategy of "beating the traffic" on the way out of an event.

Camacho had been in the hospital since last Tuesday, when he had been shot in the face while parked outside a bar. Police guess that the car-hop asked Camacho if he would like anything to go with the beer he ordered; there being, after all, little use for a chaser without something to chase. His last words might have been, "Yes, I'll take a shot." Police found ten small bags of cocaine in the car, but the sales ticket confirms he did not order anything but the drinks.

Camacho's friend, 49-year-old Adrian "Drāno" Moreno, was killed in the attack. It is customary in Puerto Rico to have goofy, rhyming nicknames, also to dress up for work in a gladiator suit and ride in cars full of bags of illegal drugs. However, police have not determined a motive for the crime, as it is astonishing to blow away the driver then walk away without the "blow."

One of Camacho's sons, Héctor "Cheese Nacho" Camacho, Jr. said that, although the family had decided to take his father off life support, God would be the referee who would have to rule on that final T.K.O., although with that panel there is never a split decision. It is not clear whether this is the son police accused Camacho of assaulting earlier in the year, an episode the elder Camacho dismissed as "just a bit of sparring."

It's NOT Macho Time, nor will it ever be again

Camacho is the only boxer to win medals in seven different divisions, thereby successfully evading the boxing licensing boards in each region of Puerto Rico. But after his boxing career ended, he had had drug, alcohol, domestic violence, and other problems, most of them carried live on a reality show called "Es Macho Time!" on YouTube. Reportedly, the audience will vote next week on whether to put Camacho back onto life support, so they can watch in real time to see what happens next. Actor Orvil "Killer" Miller expressed sadness but admired Camacho's flamboyance. "He was always a great showman," said Miller. "He would have wanted it this way."