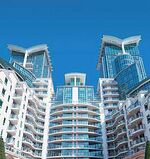 At UnNews headquarters in Wikia City, failure to work is as remote a problem as failure to pay.

NEW YORK, New York -- Bank of America has demanded that stockbrokers at its U.S. Trust division sign stricter contracts, after a broker went to a competitor and took with him clients worth a total of $5,900 million.

Compared to the usual two weeks, the brokers will have to give 60 days' notice before quitting. They cannot win new accounts during that time--or for six months afterward. The new contracts came just before the year's bonuses, and the accompanying instructions reportedly said, "The door's right over there."

Such arrangements are called "garden-leave" clauses, because the employee could spend his last two months at the company gardening rather than pulling in new business. The term comes from the U.K., a land of many gardens and no new business.

American car companies have no such arrangements. However, entire divisions spend all day in a "jobs pool," surfing the Web and playing cards because they cannot be fired under union rules. However, the pool is smoke-free, and there are no actual gardens. Likewise, in most state governments in the U.S., restrictions on work have always been thought unnecessary.

Stealing customers when a broker moves to a new firm is as common a practice on Wall Street as it is among hairdressers. Michael C. Brown quit U.S. Trust last year and took his well-endowed flock to a start-up company. But U.S. Trust's new deal also requires brokers to renounce that too, and to pull in three new millionaires each year to qualify for bonuses. Sallie Krawcheck, head of Bank of America’s wealth management division, is seeking to use the harsh new terms to "stem defections." Reportedly, she considered and rejected chaining brokers to their desks, stating, "We're mature professionals here."