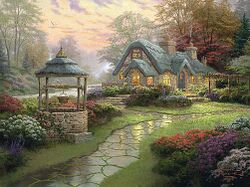 UnNews was unable to retain the rights to reproduce Stevens' work, but here is a work depicting a similar subject by another juvenile artist named Thomas.

NEW YORK, New York - Although he has made no intelligible comment about it, local kindergartener Billy Stevens was clearly upset today, blubbering pitifully, when his painting of a house with a lemon-yellow sun above was ripped in the corner by bully kindergartener Erica Vasser.

Vasser was walking by the easel on which Stevens was hard at work, painting a thick blue stick figure of a mommy with curly hair. Although Vasser claims she merely stumbled and fell into the easel "on akthident", Vasser none-the-less caused the painting significant damage, possibly severely affecting the value of it on the auction market. Vasser is well-known in the class to be a vicious bully, and she has on more than one occasion caused damage to paintings and other art works by her bullying targets in the past.

The unusually large canvas, measuring 10 by 15 inches, sustained a vertical tear of about two inches in the lower right-hand corner in the "accident".

The painting, commissioned last week by kindergarten teacher Miss Marla, features a brown house on a green ground, with large red flowers all around it. Two blue stick figures, the "mommy" described above and a taller, hairless "daddy" stand side-by-side next to the house. The work is widely regarded by Steven's mommy, Janice Stevens, as a premier example of his "Rose" period, in which a common focal point of his house paintings is the newly blooming bed of roses in the front yard that Janice takes such pride in.

"It really is a shame," the mommy Stevens said. "They say it can be repaired, but there's no telling how this is going to affect its market value. Billy is obviously very very upset."