The Columbine High School massacre is considered one of the deadliest shootings in American history. While school shootings are extremely common and an accepted part of American culture, certain elements of the Columbine shooting were extremely disturbing to the general public. 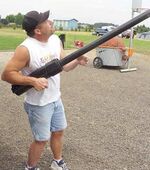 Example of a dangerous firearm used in the shooting (potato gun)

Eric Harris and Dylan Klebold were two star athletes with a history of passiveness and conformity. Both were devout Christians and carried copies of the Bible with them everywhere they went. They were also fans of popular music, and especially rap music. They often dressed in expensive white Nike basketball shoes, white oversized t-shirts adorned with sports logos, backwards red baseball caps, and baggy jeans.

Because of their love of sports, choice of music, and religious beliefs they were constantly harassed at school. The popular clique of black-clad goths often teased them for their lack of black clothing and because they did not listen to industrial music. The only friends Eric and Dylan had were a small group of social outcasts who enjoyed rap, country music and sports. Because of their love of oversized white sports jerseys, they called themselves the "White Shirt Mafia".

While April 20 is traditionally a joyous day of pot smoking, in 1999 it was marred by a terrible tragedy. At 11:14 a.m. Eric Harris and Dylan Klebold began shooting at their fellow classmates with illegally obtained firearms. Despite the strong gun control laws in the United States, Harris and Kleybold were armed to the teeth. Their arsenal included high-powered potato guns and even semi-automatic pellet rifles. They swept the school and attacked anyone with black gothic clothing. In the end, Dylan and Harris had caused minor injuries to over 7 people, some of whom had to receive up to 4 stiches. When the shooting was over, Dylan Kleybold and Eric Harras slit their own throats with sharpened crucifixes, rejecting their religious beliefs.

In the aftermath of the shooting, sales of the Bible have been universally banned, with authorities citing the violent teachings of this book as the inspiration for this attack. Musicians such as Marilyn Manson are now celebrated as heroes for donating millions of dollars to the families of the injured. All Top 40's music and white, oversized t-shirts are now banned or shunned in most American high schools. Any student wearing a red baseball cap or caught playing sports is immediately sent to a school psychologist for rehabilitation. The NRA has completely reversed its position, renaming itself the No Rifles Association, as they point out that whilst guns don't kill people, people do (or rappers in whales for some reason), guns make it a hell of a lot easier!