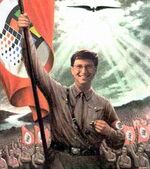 Bill Gates at the renaming of his Company

REDMOND, Washington -- Bill Gates has recently come under fire over his proposed name change of his company Microsoft. Many critics believe this is just a ploy to hit back at the world because he is no longer the richest man in the world. The proposed change is to change Microsoft to Nazisoft Inc. UnNews went to the streets to ask the opinion of the UnPublic and the results were conclusive. 99.999999999999% of the greater UnPublic thought the name change was very representative of Bill Gates actual morals and future Goals (Note: the 0.00000000001% was actually Bill Gates). One anonymous member of the public went so far to say that Bill gates was "Quite a successful business man who followed a good business model in the software market but had the morals of a neo-nazi donkey that had just drunk 4 litres of drainage fluid mixed with vodka".

UnNews will keep you up to date with any further mistakes from the newly named NaziSoft Inc. On a side note, the symbol of Windows is being changed to the Nazi symbol.