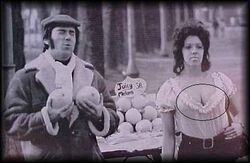 Some big norks, seen emerging this morning. Note the complete tit to their right.

LARGE, JUGGLY BOOBS appear to be coping well as climate change warms the globe. Researchers found that large breasts and cleavages are being exposed earlier in the spring than they used to, keeping step with the earlier emergence of hot pants and mini-skirts.

Researchers point out that the the emergence of boobs in the Netherlands have not managed to adjust, possibly due to the lack of really big bouncy tits in the country. Understanding why some titties in some places are affected more than others by climatic shifts is vital, they say, but is "likely to be linked to size, pertness and jugglyness".

The Royal Society for the Promotion of Breasts (RSPB) commented that smaller "fleshy pillows" are likely to fare much worse than larger breasts as temperatures continue rise. However, hope is not lost on small-tittied ladies as it is also pointed out that "augmented" breasts are likely to emerge "even earlier" in the year "and possibly as early as late Feburary".

"We think it’s a rosey future for big boobs as global warming continues," said Sidney Jameson of West Ham University, who led the new research, "I for one will be getting a new pair of more powerful binoculars, woof woof!".