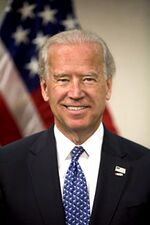 Washington D.C, United States -- On August 17th, 2012, Joe Biden did it again. While speaking at a rally against Mitt Romney, he racially insulted every African-American to ever live by saying six words.

While discussing the republican plan's to deregulate the banking industry in the US, and making them "unchained", he stated "(Romney's) going to put y'all back in chains."

While the context of this was relating to the regulation on the banking industry, it is becoming more apparent that Biden's latent racist leanings are only just below the surface, and that this was actually him referring to his personal desire to put African-Americans back into chained slavery.

He further compounded this horrendous hate speech by talking about the Democrat's plans to get the American economy "back in the black". This obviously showed that he, as a Caucasian upper-class male, was completely in favour of using African-American women as sex slaves to slate his unnatural lust for degrading acts of sodomy and sadism.

And throughout his speech he referred to Romney as "he", and never once using the feminine pronoun, "she", showing that he did not value the place of women in society, and felt that women were best off in the kitchen or in the bedroom, and not in the workplace.

Regarding Biden's extremely offensive and degrading remark, President Barack Obama said, "Joe was really doing a good job. He was getting the crowd really pumped. But then he took a giant dump on every thing we've worked for. So close, Biden. So close." Coprophiliac rights groups have expressed dismay at the President's comments.

Following the interview with the President, Biden commented, "I don't even know what I did. I thought I was being very straight forward with my comments."

Same sex relationship advocacy groups are now up in arms at Biden's "straight" comment, realising that he was declaring homosexuality to be both unnatural and part of the cancer that was destroying society from within.

Representatives of the Hearing and speech impaired advocacy groups are also angry at Biden's speech, and this is believed to be because they couldn't hear what he was saying. Unfortunately none of them were able to comment.

In other news, Mitt Romney and Paul Ryan are sure to win the next election in a landslide. They will bring America back to it's former glory and stride across the world shaping it all into a glorious utopia.

This report has been taken from the Fair and Balanced desk of Fox News.