UnNews:Bettie Page rises from the grave 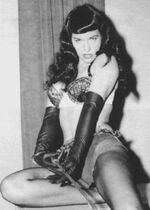 Bettie Page, the sexiest undead ever

LOS ANGELES, California - During her funeral at the Westwood Village Memorial Park Cemetery, the undead pin-up girl ripped open her coffin and started spraying a black blood-like substance on the guests, instantly changing them into pin-up model zombies. At the cemetery, she revived several prominent actresses and models buried there, among which is Marilyn Monroe.

Poor Marilyn, once glowing of beauty and energy, but her life of glitter and glamour ultimately became meaningless, and now she's already gotten tired of being undead

Bettie Page is presently spreading her legions across the USA. Her cult following has considerably increased in numbers. She claims that: