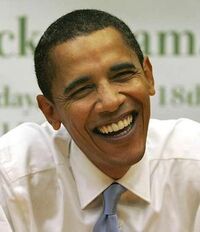 "It began the day after the Iowa caucus," recounted Seymour to this reporter in husky tones. "I'd been on the campaign trail from the beginning, but never thought Obama had noticed me. That day, I was in a side room alone, analysing press coverage, when he walked in. He asked me if I wanted to do well in his team, if I wanted to move forward. I didn't know what he was getting at, but then he said something about being 'fired up and ready to go'. I could see that his crotch was twitching and at that moment I decided to do what was right for my country."

"The first time was not the best," confirms the really rather beautiful Karen. "It was rushed and uncomfortable, short and unsatisfying. BA - that's what we call him, like BA Baracus from The A-Team - simply shot his load and left me to clean up the mess. And you know what they say about black men? No, not that they're all thieves, the other thing? Well Obama is the exception that proves the myth. He could barely satisfy himself with that thimble he has the nerve to call a penis, let alone anyone else. Still I was excited. It's not every day that you find yourself being boned by the first Black President of the United States of America."

Things moved on quickly from there. The lovely Karen Seymour, caught up in a swirl of romance and campaigning, had several encounters with Obama over the next few weeks. By the time of the Nevada Caucus, Obama seemed a changed man. His ego had been boosted by early success in Iowa, but the success was going to his head. Karen, dressed elegantly in a conservative silk blouse and black skirt, her firm, supple breasts rising and falling with each breath in and out, reported a strange development in Barack's sexual side "It was around this time that he started asking me to abuse him. I would be on top, and he would make me call him names. 'Uncle Tom', 'Hillary's bitch' and 'Jumped-up Porch Nigger' were his favourites. He would lie back and cry like a little baby girl, begging for forgiveness."

However, after Obama lost in Florida events took an ugly turn. "That night I went to Barack's room, carrying a tub of peanut butter and a spatula and sporting a large black strap-on (as had become usual by this time). I entered and I could already see the rage in his eyes. The official line might have been that Clinton was "basically trying to take a victory lap when there was no race" but Obama was furious. I had never seen him like this before. He grabbed me, stripped me and chucked me to the floor. He violated me in ways I didn't know were possible. He shat on my chest. His language and voice changed from the usual soft and measured tones to something more like that of a demented Tourette's sufferer: 'Bitch! Cunt! Whore! You fucking love it don't you?' He just kept going and going. At one point I looked at him and horns were starting to grow out of his head. He even started breathing fire!"

Karen Seymour, the beautiful victim of a politician turned one-off man mental, has now recovered from the events. Looking at her today, she seems every bit the confident 19 year old she once was. The spark is back in those big eyes. Here's hoping this isn't the last we see of her.

At the time of going to press, the Obama camp has declined to comment.