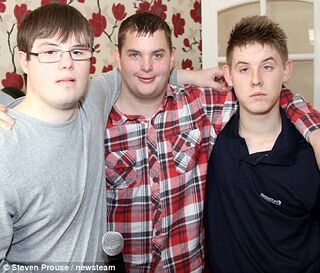 The offending singers, who would be a proud addition to any pub and might even deal with the riff-raff.

NORTHAMPTON, England -- Three friends with learning difficulties, including one with Down's syndrome, performed such a poor rendition of the Beatles' classic "Hey Jude" at the Abington Pub in Northampton that the pub landlord removed their vocal cords.

Suspicions grew after landlord Neil Bartholomey purchased a bumper pack of best-value gags, three 2m × 2m cemetery plots, and a DIY embalming kit. It was later revealed that the whole patronage of the pub had been in on the plot to end the boys' budding singing careers.

"They were driving away customers with their ranting," Mr. Bartholomey explained. "It's not like this is the first time they've done it, either! Sometimes they just come in at about 3 o'clock, order a dozen Shirley Temples, and don't leave until their mum picks them up at 9!"

Mr. Bartholomey denied that extracting their vocal cords and leaving them to bleed violated human rights. "It was for the good of humanity!" he shouted as police subdued him. "If they wandered into your pub and started belting out "Yellow Submarine", you'd do the same, unless you're just not enough of a man!"

Mr. Bartholomey, interviewed through the glass at Belmarsh prison, said he does not regret anything he did and would do it again, given the opportunity. However, when this reporter suggested he might in fact have reacted to the boys' appearance, he stopped laughing at Louis Theroux on Autism and looked blankly.

"I am no racist! How dare you suggest that!" he shouted, as his Rick Perry T-shirt became taut around his pulsating neck. "I have nothing against retards! Hell, I even gave money to their charity once. I tore their vocal cords out because they couldn't sing. I've heard black people sing better than them!"

Laurie Duggan, a pub regular who orders water with a squirt of lime, said the pub's actions were despicable and had nothing to do with the boys' poor singing. "Those boys had their vocal cords torn out," she exclaimed, "because they were pussies. It's karaoke — nobody cares if you can't sing." She twitched nervously and glanced around the room. "But their dance moves," she whispered, "they were like watching Alan Carr doing Riverdance."

The consequences for the three boys have been catastrophic. No longer can they pursue the only pastime they derived any enjoyment from. Lead singer James Smyth, 23, can do nothing but sit all day long playing video games and being doted on by young nurse-trainees. The Mongoloid has been so affected by the incident he no longer feels able to get out of bed and has all his food brought up to him. He recently had a toilet installed a few feet from his bed so as to minimize the traumatic time he has to spend away from his computer, which he has taken to calling "my precious".

Surgeons have already begun operations to reconstruct the boys' vocal cords. They have kindly promised to visit Mr. Bartholomey everyday in Belmarsh to update him on their progress through interpretive Beatles' songs.