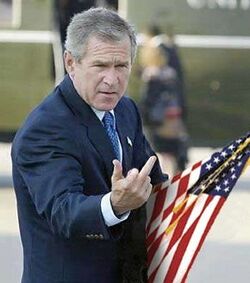 "Bush is so dumb, he took an IQ test and failed."

Leary's career began to take a sharp downturn after the inauguration of President Obama last year. "The last eight years were great for comedians like me," Leary told UnNews. "Bush made it so easy to get a laugh. I mean, until recently, almost any sentence containing the words 'Bush' and 'idiot' was considered satire."

"I mean, Bush was so dumb, he couldn't even find America on a map," Leary laughed hollowly. "Obama, however is an entirely different prospect."

Leary, whose stand-up act until recently consisted largely of reading out things Bush had said in a sarcastic voice, claims that Obama's poised, educated speaking-manner may do irreparable damage to the American comedy industry.

"You wouldn't catch Obama saying something like 'Most of our imports come from overseas.' and it will cost ordinary American comedians like me our jobs," Leary said. "They took our jobs!" the aging comedian added in a funny voice, his eyes pleading with me to laugh at the South Park reference.

"Obama is making it much more difficult for mediocre comedians to make satire," he continued. "Most of us don't have the time to actually know anything about politics, or to come up with clever and witty remarks. I have been working on some new material, however. Would you like to see my Obama impression?" at which point he began beating his chest like a gorilla and making monkey noises, before shouting "Imma do some healthcare reform biatches!"

The petition has already attracted considerable support form other comedians who "are tired of waiting for Obama to do something stupid." However, the Attorney General issued a statement saying that the proposal was "definitely unconstitutional."

Responding to this, Leary said: "That never stopped Bush before. Hahahahahahahaha."