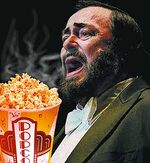 While the news came as a shock to the general community, it was no surprise to the many opera insiders who were quite familiar with the 478-pound star's proclivity for ingesting huge amounts of popcorn. "Yeah, that's how he got his nickname," said one close friend named Reggie Martinson, who wished to remain anonymous. "He could go through 30 pounds of popcorn a day, and he was always lurking near the microwave, sniffing in the aromas as hard as he could."

The autopsy, which entailed slicing deep into the very guts of the morbidly obese entertainer, squishing around his moist, bloody organs, and gouging out massive chunks of tissue for analysis, revealed that Pagliacci often wouldn't even chew the popcorn, but would rather swallow entire boxes of it whole.

"It just goes to show you," commented Chief Pathologist, Winston Redfeather. "Even the most delicous things can kill you dead like a possum in the road. So my advice is never to enjoy anything in your life, ever, since it will probably end up killing you."

Pagliacci will be buried soon, hopefully.