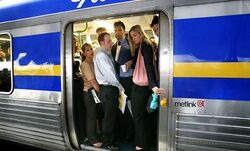 Passengers are looking at each other.

Melbourne, VIC -- Authorities are planning to implement a set of new policies to regulate how people behave on trains and trams. The plan is proposed after a number of passengers on Melbourne's suburban railway system reported threats and attacks. If the plan is ready and implemented in the current system, passengers can no longer see other passengers, and they will need to put their eye mask on from the start until the end of their journeys.

Martha, a housewife in Bentleigh suburb says, "Oh, it was horrible, he started to look at me from top to bottom while listening to his iPod. There were also many other people who were watching me." It is true that most passengers do not have anything to look at besides their newspaper and the view out of the window. However, when they do not carry their things to look at, they will just see and "examine" other people, on the same carriage or even a different one. "I cannot take it anymore, I will not take trains anymore because everyone always looking at me," says Calvin, a college student in Melbourne.

The proposed eye mask that will not attract people's attention.

Following the issue, the transportation authorities in Melbourne have proposed a set of new policies to prevent these things to happening again in the near future. One of the plans is to force passengers to use masks, some kind of eye mask. The reason behind is to avoid people looking at each other when they do not bring their newspapers. Another plan is to provide passengers with newspapers so that they can read instead of wathing at other people. However the second plan seems impossible for the current system, as John McDoe, the head of transportation safety says, "It's true". Prime Minister John Howard also states, "I do realise people's concern about their safety when people looking at them. I know this because I have experience this stuff myself."

The Melbourne government will bring this issue to the United Nations this weekend.