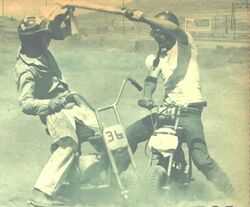 Australian Rules cricket can be played on mini-bikes, but most old-schoolers prefer monoshock motocross cycles with lots of spikes.

OUTSIDE PERTH, Australia -- Today a body hereafter known as the Australian National Cricket Council convened in a swamp outside Perth, Australia. A charter was drafted with the purpose of elevating Australian Rules Cricket to the status of an official national sport of the country.

Looked down upon by traditional cricketers as blackguards, drunken unintelligible outback buffoons, and white collar criminals, this motley group of beer-swilling Ozzies insist their sport is a proper expression of Australian manliness.

First documented play was an impromtu meet of drunken, psychotic outback dirt bikers in front of Wally's Palace of Gin and Eucalyptus Liquor, in 1958. The rules are loosely based on cricket, Austalian rules football, and jousting. They divied off into two teams, picked up various implements resembling clubs, and drove about menacingly on a cricket field. By the end of the second quarter, a goal of knocking opponents off their bikes and over the goal posts became the established way to keep score.

"This is a man's man's sport, nothing sissy about it! Australia being the largest land mass with absolutely nothing to brag about in the world, we mean to set a new standard by which men will be judged; an ability to withstand being knocked over a goal post while speeding on a motocross bike," said president of the council, Stig Monural.

Zimbat Harrowing of Atheist Foundation of Australia told UnNews, "Well, let's face it, if there were a God, He'd bloody well not have allowed this to happen."

No word yet on when the first season will start, because debate on the subject led to a drunken melee with most officials now serving in prison.