UnNews:Australia to Aborigines: 'Sorry for the killing and stuff'

Canberra, AUSSIELAND: The entire nation of Australia has issued a historic apology to the Aboriginal people who once resided there, before the current residents stole their land. "We're really, truly sorry about this," said Australian Prime Minister Kevin Rudd. 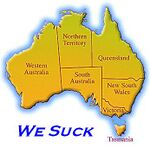 The front of a "condolences" card sent from Australia to the Aborigines.

"The raping and the pillaging and the killing of your ancestors... we all feel just terrible, really." Authorities agree that this is a huge step in right direction for Australia in making things right, but it's only the beginning.

"The apology itself is just symbolism," said noted scholar Brooks Arthur. "It's what follows that counts." Australian officials have promised that this is only the first step in what will be many gestures towards the Aborigines. Among other things, Australia will have a skywriter spell out "We're Sorry" and will have a bouquet of Daffodils, their favorite, delivered to the Aborigines. "There's really nothing they could do to make up for the fact that they killed my great-great-grandfather and stole his land," said Aborigine Mikjita Lowhandu. "But the flowers really were a nice touch."

"We're very serious about this," said Rudd. "We may have raped their women, but the power of forgiveness overcomes all." Aboriginal rights groups, such as Aboriginal Rights Now, have immediately ceased all protesting following the heartfelt apology from Rudd. While Aboriginals remain disenfranchised in Australia, the groups noted that the apology "warmed the cockles of [their] hearts" and "the 'sorry' means everything to us."

"Still, there's a long way to go," said Arthur. "The Aboriginals deserve, at the very least, some compensation, and at best, all of their land back." When reached for comment, Rudd noted that "there's no need to be hasty. First things first. And this apology, it's a very good first thing."