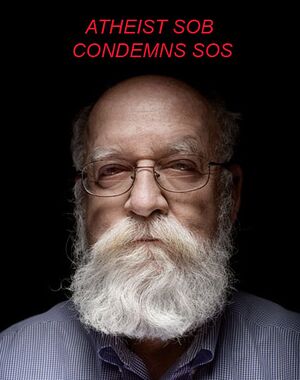 WASHINGTON DC -- UnNews is not surprised that a group of damned atheists, led by infidel Wilt Smurf, are demonstrating in front of the White House demanding that "SOS", the distress signal, be banned, because it infringes on their Unreligious Freedom, which is guaranteed by God in the American Constitution.

Wilt Smurf told UnNews, “It’s a damn shame when the establishment tries to force religion down our throats. SOS means, “Save Our Souls” – and I ask you, just exactly WHAT is a ‘Soul’? It’s just total BS! We were born outta chemicals, and that’s the truth, so help me God!"

White House spokesperson, Kurt Daft, told UnNews of the protest, “God! Will you listen to that God-awful racket!? Those Goddamn atheists just won’t stop ragging! I mean, survival depends on SOS – an international distress signal. The letters don't have to stand for anything in particular, such as "Save Our Souls." In Morse Code, the letters "SOS" simply create an unmistakable sound pattern: three short - three long - three short - pause - repeat (· · · – – – · · ·), and they're easy to remember.”

Daft continued, “Even the President thinks this is total nonsense. I mean, Jesus Christ whatever next! What else should it be but SOS? To my knowledge that’s the main reason why God created Morse code, according to the Bible.

“The term "SOS" is used to refer to all distress signals with or without Morse code and will vary depending upon where you are. For example:


Smurf told UnNews, “Exactly! Jack Bauer is always right. If the world changes SOS to be SOB, like Bauer, then we would all go home peacefully and praise God for His divine assistance! – Ha-ha! Nah! I’m just pulling your leg. God only knows that there’s no God. And we would rather believe in something, rather than nothing!”

After leaving the interview Mr Smurf went out of his way to walk around a ladder which had been placed in the UnNews lobby while a cleaner removed human faeces which had been thrown against our windows. Upon seeing this he was asked why he did it because as an atheist he was obviously not superstitious, to which Mr Smurf replied: "What! I'm not superstitious! It's just bad luck to walk under ladders, that's all."