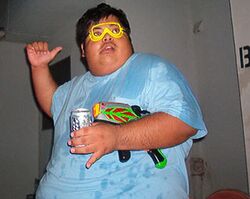 Pablo Gutiérrez as a kid, a few seconds after starting to uncontrollably gain weight.

PELOTILLEHUE, Chile - 23 year old Pablo Gutiérrez is now oficially the most obese man in the world. He lives in Pelotillehue, Chile, and weighs over

kilograms, which is about twice the mass of the Sun. His daily diet is composed of fresh fruit, salad, breakfast cereals, meat, vegetables, small animals, personal vehicles, Cessna airplanes and tectonic plates. Gutiérrez has had a long history of weight gain ever since he suffered an accident as a child, which involved a severe lesion to his pineal gland.

"It used to be a huge issue", says Pablo, "But eventually I realized how truly amazing my own potential was. No bully was going to tease someone with such a huge gravitational pull. My tidal forces always kept me out of trouble".

"I'm happy just the way I am" he says, proudly. "Now that I've finally beaten the Chandrasekhar Limit, I feel like I'm ready to become a neutron star anytime, now". Optimistic about his newly adopted high-proton weight gain diet, Pablo aims to reach the impressive mark of eleven solar masses in about two years."My greatest dream is to become a supermassive black hole, but that's just a dream. I try to make the best of my present situation, though."

"The greatest moment of my life was when I surpassed Sirius A's mass.", says Pablo, proudly. "It's an indescribable feeling, to know that you are finally ready to be part of a binary system", he explains.

Pablo's magnificent feat was finally recognized last year, when he was jogging next to a recently built store in his hometown Cuzco. His tidal forces left more than twenty clerks completely naked, their clothes hopelessly orbiting Mr. Gutierrez's body. Hermann Guinness, the chief editor responsible for the Guinness Book of World Records, immediately sought to add Pablo to the 2009 edition, recognizing the young man's impressive achievement, but not before losing all of his clothing as well.

The last registered case of astronomical mass in a human being happened a long time ago, in 523 BC, when the Greek philosopher Anaxogonas of Elea suffered an accident and fractured his pineal gland, after falling from his donkey. His mass abruptly rose to over

kilograms. The reason for the phenomenon still isn't fully understood.