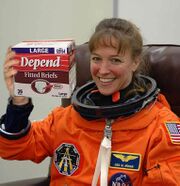 Corporate sponsors are lining up for a share of the insane astronaut demographics disposable income.

CORPUS CHRISTI, Texas - Lisa Nowak, the former astronaut fired by NASA after she was charged with trying to kidnap a romantic rival will now be working for the Navy. She has been hired to develop what are being called “Determination Mindset Protocols” for the Navy Seals. She joins the staff of the Chief of Naval Training Command in Corpus Christi next month.

Navy spokesman, Lt. Sean Robertson explained her duties, “Navy Capt. Lisa Nowak will work on developing curriculum and training programs to teach Seals to develop and maintain the mindset she had when she traveled from Texas to Florida in a single drive with no breaks. Her performance was an example of the gritty single minded determination we want our Seals to emulate. When these soldiers are given an assignment, their concentration should be on only one thing, getting the job done. With no questions, no distractions, no second thoughts, no stopping at Stuckeys for a Pecan Log, just piss in your diaper and take out your target. That is the kind of dedication to duty that this country was built on“

Nowak was originally expected to report for work this week, but Robertson said Nowak will start her new job in April.