GUAVA PEAKS, Texas -- Today, The Associated Press proved that its control over all the information in the Universe gives it complete mastery of Space, Time, celebrities, and reality itself. Fortunately for all of us, the test subject they used to prove their point was none other than Paris Hilton, the attention whore whose rise to fame was a direct result of the sheer combined willpower of porn-watching internet losers. 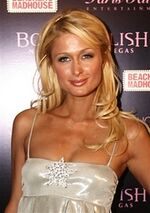 Paris Hilton before The AP ignored her...

By refusing to say anything about Paris Hilton for a week, The Associated Press effectively removed her from the public consciousness. Nobody knew or cared about her, much less her disappearance. When The AP ended the ban on news about Hilton, she remained nonexistent for a few days. It took nearly two days for Hilton to become a reality and start doing retarted illegal shit again.

The only people who are concerned by this are other media whores and rabid libertarians who think the news should not be tampered with. Everyone else found the removal of Paris Hilton from the universe to be quite refreshing, and some people are petitioning to have The AP do it again. One AP spokesperson said, quote: "We're thinking about selling people and things to ignore on ebay. We think people would pay to stop hearing about Britney Spears and Anna Nicole Smith."