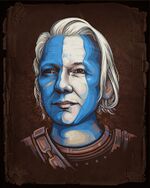 ECUADORIAN EMBASSY, England -- Addressing a sideline meeting at the UN General Assembly today via video conference, Wikileaks founder Julian Assange dug into President Obama for using the Arab Spring to score cheap political points, as well as taking the opportunity to take credit for it himself amidst his personal legal troubles.

"It must come as a surprise to Tunisians for Barack Obama to say the U.S. supported the forces of change in Tunisia," said Assange as the video feed cut in and out. "But it would come as no surprise to them to hear me say that my organization is what caused regime change in their country."

Barack Obama, who is in the middle of an election campaign, made his speech at the UN where he stated, "It has been less than two years since a vendor in Tunisia set himself on fire to protest the oppressive corruption in his country" and "The world has been captivated by the transformation that has taken place, and the United States has supported the forces of change."

The embattled Wikileaks founder also addressed his current legal troubles without mentioning why they exist. He noted that he has "been detained for 659 days without charge", referring to his time spent on bail and hiding in a foreign embassy to make use of Sweden's inability to file charges in absentia.

"It is time for the US to cease its persecution of WikiLeaks," said Assange, who has four warrants out for his arrest, none of which have to do with the US or Wikileaks.

Assange criticized the US for building a "national regime of secrecy", then cited a document obtained via the US's Freedom of Information Act to support his argument. It indicates that the US army argued in the case of an intelligence analyst accused of leaking secrets to Wikileaks that Wikileaks is an "enemy of the state", but the charge was deemed not strong enough to go to trial. The document's justification was that Wikileaks is an "anti-US and/or anti-military group", a claim which Assange described as "ridiculous".

He then wrapped up his statements in order to have a friendly conference call with Vladimir Putin before attending a meeting to decide which of the latest leaks his organization could unveil would be the most damaging to the United States.