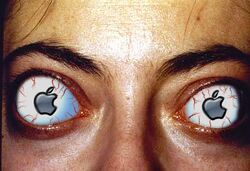 "The iEye, first of the iOrgans to be tested in humans, has been a huge success. We expect the iLiver will perform equally well", said Apple spokesperson Eva Peron

NEW YORK – Reports that Apple Inc. co-founder and CEO Steve Jobs have received a state of the art liver transplant have been confirmed. Jobs, whose recovery from pancreatic cancer appeared less certain when he had to take medical leave in January, has received the first i-Liver transplant two months ago.

A spokesperson for Apple Inc. has confirmed that Jobs is recovering. However the co-founder of Apple was hesitant to announce the release of the i-Liver until he was sure that it was working correctly, and was compatible with his other body organs, and that the organ would not be subject to a recall.

“Mr. Jobs is happy to report that the i-Liver is a very robust organ. It has synced with the other add-ons in his body, and that the platforms are, of course, compatible,” said Sharon Tender, Apple spokesperson. “The surgeons had no problem docking the i-Liver to Mr. Jobs system.”

Jobs, got the idea for the i-Liver while undergoing chemotherapy for pancreatic cancer. He reportedly approached doctors about the idea that would “seamlessly blend all liver functions in an intuitive format, that would have broad, and universal appeal, and enough storage to hold all of the episodes of House for later viewing.”

“The i-Liver comes in own sleek case, and requires no cognitive input on the part of its host. Its capacitors automatically adjust depending on the load. It's flow of bile is efficient enough to qualify as a 2G format,” said Tender.

One draw back to the device is that it is compatible only with type B postitive (and negative) blood. The exclusivity of the blood type could lead to protests by those who are type A and type O blood types.

Once he returns to work, Jobs will begin work on an i-Testicle, one that will help to the body produce sperm while also acting as a pedometer.