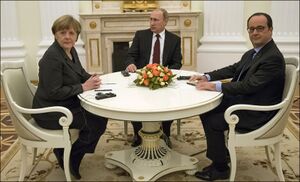 What's happened to our order, Vladimir?

MOSCOW, Russia -- Faces were the colour of beetroot as Russia's legendary 'bad service' reputation delayed the soup course at a dinner held by President Vladimir Putin in the Kremlin.

The clearly irritated German Chancellor Angela Merkel and her French partner, President François Hollande were left waiting for hours for their food in a power lunch with Putin. The Russian leader blamed the recent Ukrainian potato harvest for the long wait and promised that the meal was worth waiting for.

"Mrs Merkel hates to spend time with either of these two bozos," said a German official, off the record. "Hollande because he is ridiculous, and Putin who she is sure has real blood on his hands from his day as a KGB officer in East Germany."

The trio (or, in Russian, 'troika') were meeting to discuss Greece, which in March will need a dollop of new money with which to make payments on the old money, except that the country's new Syriza government has vowed not to do so. When the slow service got annoying, Mr Putin had been trying to explain that Russia's oil money is not flowing as freely as it used to, and that Russia does not need new Mediterranean frontage, as it is busy with beachfront restoration elsewhere.

The delay in serving his guests did not seem to bother Putin, who had already eaten that day (a large slice of Novorossiya Stroganov) and had shot a bear to lose weight. By coincidence, the waiter was Greek, and Syriza had promised him a higher wage, plus free electricity if he didn't earn too much extra in tips.